For the first fifty years after incorporation in 1787, Bradford residents relied on literal horsepower for transportation.  Goods and food were delivered via saddles, wagons, carriages, stagecoaches, and sleds sometimes using as many as eight-horse teams. By the 1850s, however, New Hampshire had earned its bygone nickname of the Railroad State because of the rapid development of short line tracks. Railroad transportation would reign supreme here until replaced by the widespread use of motor vehicles a century later.

In the 1840s, two railroad lines vied for service through Bradford. The Contoocook Valley Railroad and the Concord & Claremont Railroad agreed that whoever completed the tracks first would concede to the other, with the latter winning out. On July 1, 1850, the leg from Warner to Bradford was opened with much fanfare as the Concord & Claremont train pulled into our station. Sadly, there was also an accident that day that cost the life of the conductor’s brother.

Within a decade, the Bradford Station featured a passenger depot, machine shop, paint shop, turntable, water tower and locomotive sheds. Initially there was a daily scheduled passenger train “up” from Concord and “down” to Concord, with plans for a second run. Freight was sent three times a week, with more runs as needed. Commodities included bobbins, powder kegs, scythe stones, lumber, granite, gravel, livestock, wool, and eventually mail and fresh milk. High school students later used the train to get to school, much to the vexation of the harried conductor.

Before the railroad era, Bradford farms provided for their own and the local community’s needs. Faster transportation opened up trade for exporting and importing goods. It also inspired a tourist business of hosting summer boarders in inns and on farms. Eventually, there were three major hotels in town (The Springs Hotel, the Raymond House, and the Bradford Hotel) that sent stagecoaches to the depot to pick up guests. A lively merchant class arose to provide services for the influx of guests, as well as the burgeoning population. Manufacturing also blossomed at this time as the mills that had cropped up along our fast-running streams could increase production and take advantage of the Boston markets.

The impact on Bradford’s economy and population was greatest during the twenty years (1850-1870) that Bradford served as the end of the line. Bradford Station was situated at 684 feet about sea level, a significant gain from 288 feet in Concord which was twenty-eight miles away. There were sharp reverse turns along the route that whipped the cars back and forth. There were numerous derailments, flooded tracks, and cow wrecks. In winter, the locomotive might take off across a drifted field. Despite these hardships and financial uncertainty, the railroad pushed on toward Claremont. Higher grade track was required as the line approached its highest elevations on the flanks of Mount Sunapee. The Newbury Cut, completed in 1871, was described in a newspaper thus: “It opens a deep throat to the observer and will ever remain one of the greatest triumphs of enterprise, science, and gunpowder over New Hampshire granite.”

In 1872, twenty-four years after the chartering of the Concord & Claremont Railroad, the junction was completed to Sullivan Railroad in Claremont. Holiday crowds, bound for Lake Sunapee, kept up a lively tourism business. Hundreds of trunks were transferred from the train to the steamboats that transported vacationers to the many hotels that dotted the lakefront.  The trains were also busy carrying supplies and manufactured goods. Even ice, cut from the lake and stored in sawdust, was shipped to Boston for refrigeration. Some baggage cars were converted to postal cars providing remarkably prompt delivery of mail. Bags were tossed on board at city stations and sorted en route.

In 1889, the Concord & Claremont was bought out by the Boston & Maine Railroad. The wooden lattice bridges were showing signs of decay and the out-lying tracks were not maintained as regularly. The 1900s brought the onset of the automobile industry and the subsequent decline of rail travel.  During both World Wars, however, the trains proved heroic in delivering munitions and supplies to ports. In 1949, the centennial of the opening of the Bradford-Warner line was feted, but the end of an era was at hand. The last passenger train rolled through Bradford in 1954 and postal service ended its contract with the local line in 1955. There were two sparks of activity that followed in the next few years. First, was the hauling of cement for the construction of the Flood Control Dam over the Contoocook River in 1959. And finally, there was the brief but colorful appearance of a local attraction called Steamtown in 1961. An avid collector of steam locomotives established this tourist business in Bradford, but was thwarted by complications and equipment failure that doomed the endeavor. The tracks, which followed what is now Route 103 to Newbury Harbor, were torn up in 1964. However, the “open throat” of the Newbury Cut remains for all to see, just a short walk from the road.

Railroad travel remains a romantic and exciting piece of Bradford’s history. It harkens back to a time when our town was poised on the brink between its agrarian past and a vision that pulsed with new prospects and technology.  Nowadays we may become wistful about the simplicity of Bradford’s beginnings. But put yourself in the place of those that reveled in the thrill of what railroads had to offer over a century ago. Listen for the sounds of the conductor slamming the door and calling “All Aboard”! Hear the pull on the air whistle, the clang of the bell, and the steady puffs of the locomotive as it pulls out of the station, gaining speed and hurtling on to the future.

Be sure to visit the Bradford Historical Society to see the new exhibit. Look for publicity about area events regarding the age of railroads in New Hampshire. And check out our two town histories, “Two Hundred Plus” and “Bradford and Warner”, for more information at the Brown Memorial Library. 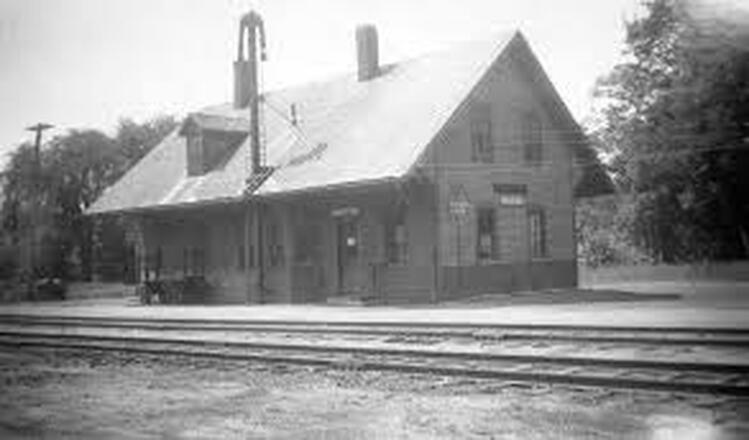